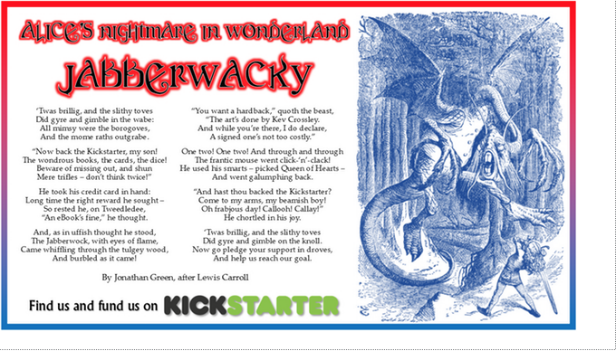 The Fighting Fantasy fans among you will likely be familiar with the work of Jonathan Green, who as well as the aforementioned gamebook series, has also become known for his work in the Black Library series, as well as contributing fiction to the expanded universes of properties like Doctor Who, Star Wars and Teenage Mutant Ninja Turtles.

Now, he is planning to expand his range with an Alice In Wonderland-themed gamebook known as Alice’s Nightmare In Wonderland, which he is currently trying to fund via Kickstarter. Coming across as a nightmarish mish-mash of Lewis Carroll’s characters and his trademark Fighting Fantasy/Choose Your Own Adventure style, this is something we would dearly hope to see the light of day, and we’re sure a lot of you will too.

To help make this prospect a reality, head to the Kickstarter page for Jonathan Green’s Alice’s Nightmare In Wonderland. If there’s one adventure you should choose, this is it.

Jonathan Green’s Alice’s Nightmare In Wonderland is being crowd-funded on Kickstarter.com now.